Hey folks, it’s Fall, and you know what that means.

I can hardly drive more than a few miles without passing a farm stand, a pumpkin patch, or even someone with a bumper crop trying to unload a few pumpkins on passersby.

It’s one of my favorite times of the year.

The weather is cooler, the leaves are changing, and there seems to be a sense of settling in for the cold months ahead. Which in my house means cooking lots of winter squash, including pumpkins.

If you too find yourself with a pumpkin or two on your hands or your own bumper crop, you’re probably already planning on roasting some of the seeds. While you’re at it, why not save a few seeds to grow next year as well?

I used to think that seed-saving was some mystical ritual that was too hard for the average gardener. But with the help of a seed-saving friend, I learned just how easy it is.

And come February I don’t have to remember to buy seeds to start for my garden. I grab my shoebox with my envelopes of seeds and start poking them in pots of dirt.

For some folks, seed-saving goes beyond convenience and into the political.

As a society, we are so far removed from our food supply. And more and more large corporations and government institutions control the entire process.

So, for many folks who save their seeds from year to year, this is a way of taking back control over their food.

Whatever your motives, saving pumpkin seeds is incredibly easy to do.

Let’s toast some seeds to eat now and save some to grow next summer.

Whether you’re making pie or jack-o-lanterns, save your pumpkin ‘guts’ when you scoop them out.

If you’re cooking more than one variety at a time, be sure to keep the pulp from each pumpkin separate. (Also, if you’re anything like me, label your varieties, so you know which one is which. They all kind of look the same.) Separate the seeds from the stringy flesh.

I find squishing the pulp between my fingers causes the seeds to pop right out. It’s kind of oddly satisfying too.

Or you can put the seeds and pulp in a large bowl of water and swish it around. The seeds will float as they become separated from the flesh. Clean your seeds after you’ve separated them from the pulp.

You’ll need to rinse your seeds thoroughly under warm water in a colander. Really give them a good scrubbing. A little pulp left on the seeds is no biggie for roasting.

For the seeds you are saving, you need to be meticulous, or you can end up with rotten seeds and will need to start with a new batch.

Spread the pumpkin seeds to dry on a clean towel in a thin layer. A tea or kitchen towel works best, nothing too fuzzy. Use a clean kitchen towel to dry off your seeds.

And whatever you do, DON’T use paper towels!

The seeds will stick to them like glue, and you’ll never get all of the paper and seeds unstuck from each other.

No, I don’t know this from personal experience, why do you ask?

Pat your seeds dry with your towel and then pick out about a dozen to save. Put them in a single layer on a cooling rack or a clean expandable window screen. Take care that they aren’t touching each other. You want air to be able to circulate around them.

Keep the seeds in a cool, dark, and dry place for 2-3 weeks. Check on them a few times to make sure no mold develops.

After the seeds have dried out, place them in an envelope with a tablespoon or two of dry wood ash. The ash (which is useful in so many ways) will protect the seeds from fungus growth. Pumpkin seeds coated in ash, ready to save for next year.

Label the envelope with the type of pumpkin and the year. Seal the envelope and store in a cool, dark, dry place until you are ready to plant them next year. If you don’t have a place in your house that stays cool, you can store your seeds in the fridge.

Saved this way your seeds should be viable for up to two to three years.

A quick note about saving seeds from veggies.

If your pumpkin strain is a hybrid, you won’t get the same pumpkins next year. Hybrids are usually a cross of two different species to create a desired trait. Growing seeds from a hybrid plant is always an adventure to see what pops up.

Heirloom varieties are excellent for saving seeds, although even these can have their quirks. Sometimes they will cross-pollinate if planted too close to other squash varieties. You may end up with some crazy zombie pumpkins that got a little too cozy with your zucchini.

And on a personal note, if you can find them, give cheese pumpkins (so named because they are shaped like a cheese wheel, not because they taste like cheese) or long-neck pumpkins a try.

I find their flavor is so much better than the ordinary pie pumpkins you see everywhere. Plus, they’re pretty cool looking. A cheese pumpkin (bottom) is a fine heirloom with a great, nutty flavor.

Now that you have saved some seeds for next year let’s toast the rest for a delicious crunchy snack! Spread your seeds thinly on the baking sheet.

Check on your seeds every ten minutes and stir and turn them over for even browning. You want them to be ever so slightly golden, not brown.

Allow your tasty snack to cool before enjoying!

Here are a few other scrumptious variations to try.

In addition to the oil and salt toss with:

1 teaspoon of brown sugar and ½ tsp of ground cinnamon. Add these to yogurt with your breakfast.

1 teaspoon of wasabi powder and 1 tsp of soy sauce.

For a more subtle shift in flavor, use either bacon grease or duck fat in place of butter or oil. You can enjoy your tasty snack while planning your garden for next year. Where will you put your pumpkin patch? 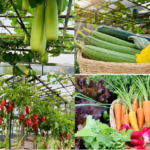 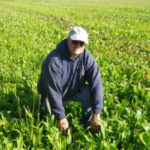